When we started this project, we initially set our sights on finding a 1967 Mustang Fastback, as that was the shape we preferred.

However, we quickly found out during our search that the '68 model is remarkably similar, albeit with some subtle differences.

The '67 model year was the biggest change for the Mustang in its early years, and it also introduced the concave rear light panel that, for us, is what drew us to the shape.

By 1968, changes in government regulations began to make themselves felt, and for the '68 model year the Mustang gained front and rear side markers as part of attempts to improve road safety. 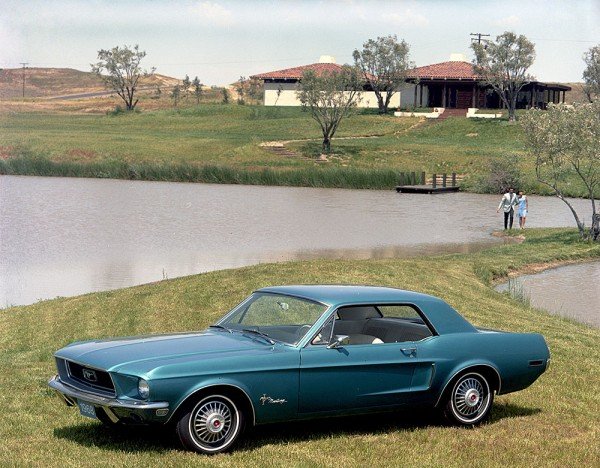 Notice the side markers both front and rear on this '68 Coupe. Also visible, the revised side scoops and Mustang script behind the front wheel

The block MUSTANG lettering behind the front wheel of the '67 was replaced by more artistic script lettering, while the horizontal grille bars that connect the GT Pack's front fog lights to the Pony grille emblem were removed. The Pony emblem itself was also slightly smaller from '68 onwards.

The most obvious change came in the form of the side scoops just in front of the rear wheels: the twin vent design of the '67 car was removed and replaced by a more subtle (and presumably cheaper to manufacture) chrome trim line. 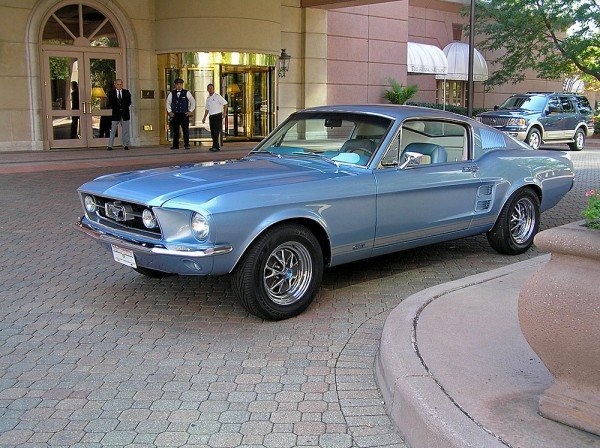 Notice the horizontal grille bars on this '67 car, the twin vents in the side scoops, and the lack of side markers

Safety regulations also dictated the use of shoulder belts instead of a single lap belt, and the steering wheel was revised to incorporate additional padding. The front seat backs now featured a latch mechanism to stop them titling forward in an accident, too.

Seat upholstery stripes now ran from front to back rather than side to side as on the '67 cars, and the deluxe trim option became wood veneer instead of the earlier car's tasteful brushed aluminium.

Under the bonnet, the venerable 289 V8 engine was discontinued mid way through 1968 and replaced with a new 302 V8 that had slightly more power.

Speaking of power, the formidable 428 Cobra Jet V8 arrived during '68 with an incredible 335hp and 440lb/ft of torque, as did a variety of equally barmy V8 options.

There are a few other smaller changes, but these are the most obvious differences.

Since much of the sheet metal is identical between the two years, it's relatively simple to pick and choose which elements you prefer.

For example, for a '68 car we'd remove the side markers and reinstate the '67 grille bars out of personal preference.

While some may suggest that this approach is not 'correct' there is some evidence that some cars left the factory with a mishmash of elements as the model year change-over took place.