History of the 1960s Ford Mustang

On 17th April 1964, the Ford Mustang made its debut at the New York World's Fair.

Ford anticipated they would sell around 100,000 units a year, and were somewhat unprepared when they received 22,000 orders in the first day alone!

That initial success would continue, with 418,812 Mustangs sold in the first year, and more than a million in the first eighteen months.

The Mustang's story began in 1962 with the Mustang I research project. Led by Lee Iacocca, Ford investigated the possibility of creating a low-cost two-seater sports car. However, low sales predictions due to its two-seat layout inspired Ford to create a new concept – the Mustang II of 1963. It boasted four seats and a more conventional design, with only the side-mounted louvres carried over from the original concept. 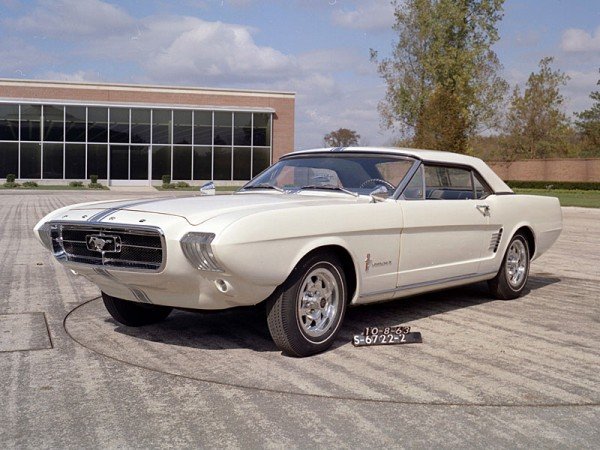 Much of the Mustang II concept's design made it across to the production model, with recognisable elements including the side and roof profile, front grille, side louvres, side marker lights, rear lights, and even much of the interior.

Production of the Mustang began on 9th March 1964, five months prior to the 1965 model year, and these early models are referred to as 1964½ cars. Although largely identical to the '65 cars, they feature a generator instead of an alternator as well as other minor changes. 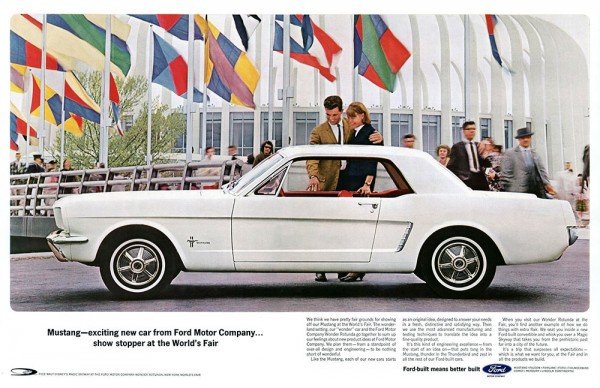 Many of the major components were derived from the Ford Falcon and Fairlane, but this re-use of parts enabled Ford to hit a low price tag of $2,368.

The '65 model saw the introduction of the Fastback 2+2 body style to complement the existing hard-top and convertible. 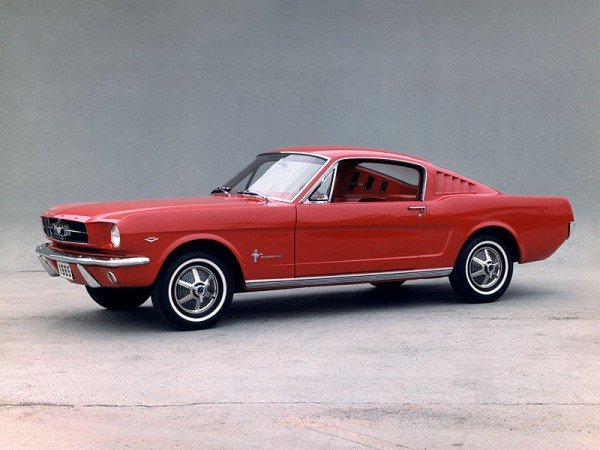 Three transmissions were available, with three- and four-speed manuals plus a three-speed automatic dubbed 'Cruise-o-matic'.

The list of options didn't stop there, however. Indeed, the Mustang is widely credited with bringing to market what we would recognise as the factory options list that we're used to today.

A GT package added an upgraded instrument cluster, body-side stripes, grille-mounted fog lights and unique GT badging, while the first of the Shelby Mustangs arrived in the guise of the Shelby GT350.

Ford sensibly chose not to alter a clearly winning design, and the '66 model year saw only minor cosmetic changes, with a new grille that featured horizontal elements rather than the honeycomb mesh, the removal of the twin horizontal bars from around the running horse logo, and new chrome trim for the side vents.

It was in March '66 that Ford sold its one millionth Mustang, and another infamous milestone in Mustang history followed soon after. 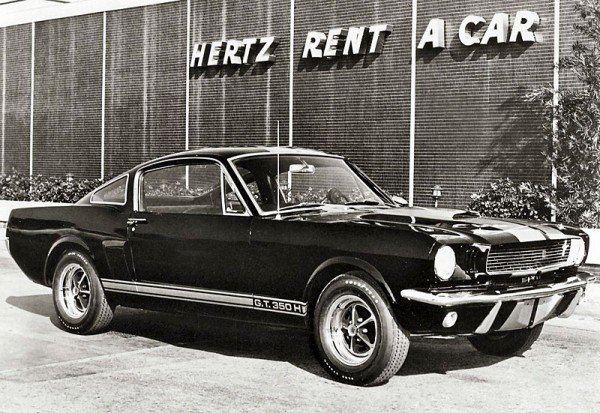 Ford and Shelby struck a deal with rental firm Hertz to create the GT350H. Based on the Shelby GT350, the GT350H was powered by a tuned 289 V8 engine producing 306hp and 329lb/ft of torque. The car was quick, with Car and Driver recording a 6.6 second 0-60mph time and a 15.2 second quarter mile. One thousand and one GT350H Fastbacks were produced and made available under the Hertz Sports Car Club banner - for $17 a day and 17 cents a mile, anyone over 25 years of age could rent one, and not surprisingly they became popular with weekend racers, coining the term 'Rent-a-Racer'.

Most were Raven Black with gold side and Le Mans stripes, although a small number were produced in Candy Apple Red, Wimbledon White, Sapphire Blue and Ivy Green. Although the first 100 units produced used a four-speed manual gearbox, following complaints from Hertz dealers of customers burning out the clutches, the remaining cars were produced with automatic transmissions.

The first restyle of the Mustang arrived for the '67 model year, with the biggest changes reserved for the Fastback. Its roof-line was now more rakish and extended further back into the trunk lid, while the rear lights and rear valance were concave in shape. 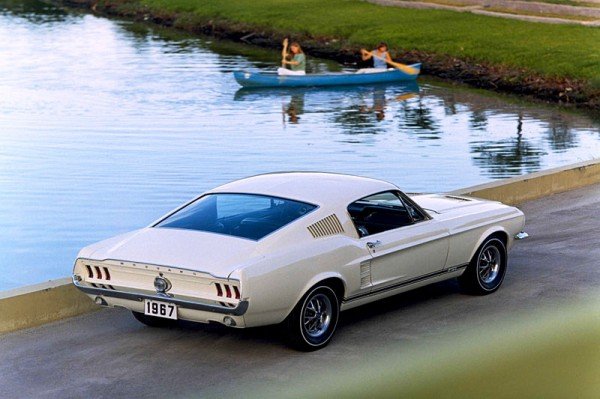 The '67 Mustang was styled to appear larger overall and, while it retained the same 108 inch wheelbase, it was now a touch longer, wider and taller than before.

The front grille was deeper and larger, too, and the horizontal bars and mesh design of the '65 model made a come-back. The side scoops now bore a twin-vent design, while much of the chrome trim was new or revised.

Inside were new bucket seats, a new instrument cluster, and the option of a tilt-away steering column.

Of course, the big news was under the bonnet: a new 390 V8 arrived with 320hp bringing the total engine range to five units. The famous K-code engine was somewhat eclipsed by this new power-plant, notching up just 472 sales versus the 390's 28,800.

If that wasn't power enough for you, the Shelby GT500 arrived with a thunderous 428 V8; it was the first American car to be equipped with a roll bar from the factory.

Styling changes were minor for '68, with the twin horizontal grille bars disappearing again, together with the Ford lettering across the hood, while the Mustang emblem on the front wings changed from block letters to a more artistic script.

Also gone was the twin-vent design of the side scoops, replaced by a simpler chrome trim piece, while new safety regulations required the addition of side markers front and rear. 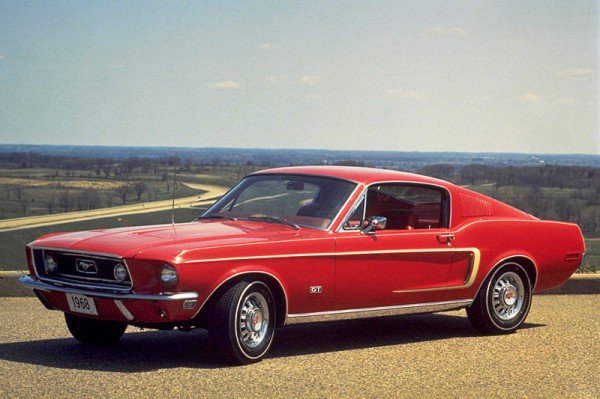 Under the bonnet, the venerable 289 was quietly replaced by the newer 302 V8 that boasted slightly more power, but the headline news arrived in the form of the massive 428 Cobra Jet. Although officially rated at 335hp for insurance purposes, it actually produced much more.

In October 1968, the Mustang made its most famous movie debut. With Lieutenant Frank Bullitt (played by Steve McQueen) at the wheel, a Highland Green 390 Fastback with a few subtle modifications roared off the screen and into the history books.

Buying trends were shifting, and during '68 automatic transmissions were selected by 72% of buyers, combining with the rise of options such as power steering and air conditioning to signal the market's desire for more luxurious transport.

Answering that trend, the '69 Mustang introduced the period that saw the pony car grow in size and weight. 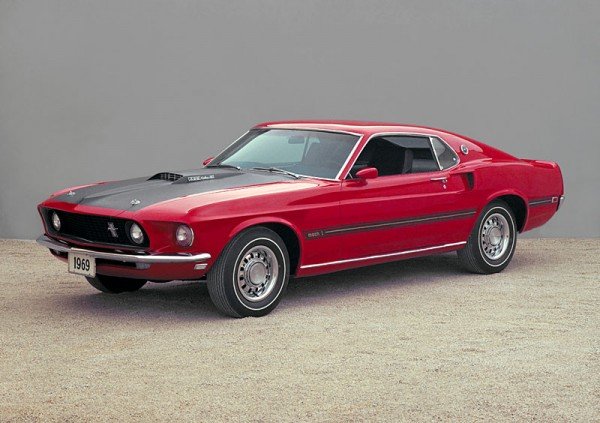 Styling-wise, the grille-mounted running horse emblem was simplified, the nose made sharper, and the side scoops were now mere vestiges of those on the original car, while new models arrived such as the muscular Mach 1 and luxurious Grande.

Underneath, it still retained the same 108-inch wheelbase and Ford Falcon suspension, but the '69 Mustang brought with it a raft of new engine options, including the 250, 351, 302 Boss (officially rated at 290hp, but actually closer to 350hp), and the tarmac-pulverising 429 Boss. Laughably under-rated at 375hp, a more believable figure would have been 500hp.

The Seventies ushered in a number of challenges for the Mustang, ranging from increased competition to tightening emissions regulations and the occasional fuel crisis.

Sales figures remained some way off those of the early '60s halcyon days, but it's remarkable that any car can remain in production for 50 years.

In total, over nine million Mustangs have been produced.